5 Men’s Eyewear Brands You Should Know

Still, with the huge choice on offer, it’s all too easy to fall foul of fashion and find yourself spending far too much on something shoddily crafted, so read on to get the lowdown on five of eyewear’s most highly regarded brands, from Germany to Japan…

Out of a workshop located in the German capital’s central district of Mitte, the brand produces hand-assembled spectacles and sunglasses crafted to the highest standard, with styles ranging from trend-led acetate designs to ultra-light stainless steel frames. The name itself stems from the German Kita, a common abbreviation for Kindertagesstätte, which nods to the brand’s first premises in a former day nursery.

Unsurprisingly, their smart combination of distinctive design and impressive engineering has won them interest from some of fashion’s most experimental designers and brands. Names Mykita have partnered with to create limited edition collaboration collections include Damir Doma, Bernhard Wilhelm and, most recently, Maison Martin Margiela.

If technical prowess and simple styling is what you’re about, Mykita’s got what you’re looking for.

Although they have stores in several countries including Germany, Colombia, Switzerland and the US, their online store remains the best bet for UK fans. The oldest of our edit’s two UK-based brands, Cutler and Gross was born in 1969, when Graham Cutler and Tony Gross opened their first flagship store at 16 Knightsbridge Green, London.

The duo handcrafted their undeniably British frames in a workshop above the store, quickly building a customer base within the capital’s fashion set. On showing their collection at Paris Fashion Week in 1982, Marie Wilkinson joined the company as design director, building on Cutler and Gross’ creative vision and transforming a successful UK business into a celebrated global brand.

Cutler and Gross remain true to their founding principle of craftsmanship, producing in their own factory in Cadore, Italy. Shunning many luxury brands’ fondness for prominent logos, each style is simply numbered and the brand name rendered in gold foil on the inside right hand temple. See their website’s ‘Frame Craft’ page for a detailed overview on how it’s all done. When it comes to aesthetics, it’s difficult to pin Cutler and Gross down due to the sheer breadth of choice the company offers in both their sunglass and optical ranges every season. Suffice to say, there’s likely to be something for everyone provided you lean more towards a British-flavoured, subtle quirkiness, rather than the stark and severe lines of a brand like Mykita.

They’re readily available throughout the UK due to both their own stores and a good network of stockists, including Mr Porter and MatchesFashion.com. 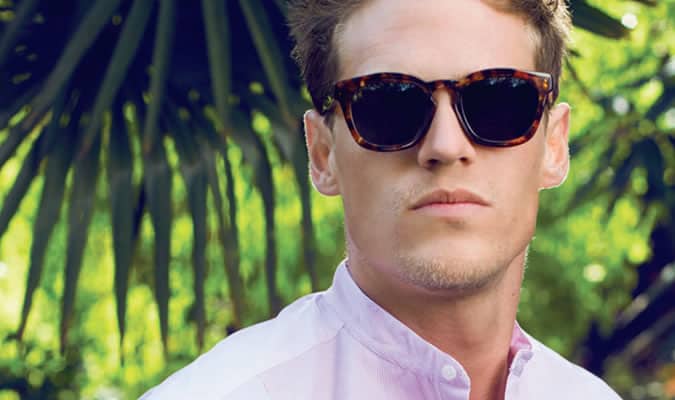 Building on his time working directly on Oliver Peoples, and the brand’s spin-off collection, Mosley Tribes, Leight debuted a new vision for eyewear rooted in the laid-back California coast lifestyle (quite literally – each pair of frames is engraved with the Venice, CA zip code: 90291).

As one of the youngest brands on the list, GLCO mix timeless silhouettes with a dose of cool, offering neutral and brightly coloured tortoiseshell wayfarers and aviators. Though their range isn’t quite as comprehensive as some of the other brands that made the list, GLCO are a dab hand at brand building.

Understanding the importance of creating a world for their customer, GLCO don’t just manufacture high quality products, they actively foster the arts that inspire them too. In April 2013, the brand rented out the Aero Theatre in Santa Monica, CA to screen Heading West, a short film by GLCO filmmaker Joey Indrieri. GLCO also publish Spectacle, a print magazine covering everything from eyewear (of course) to what Cali couples like to cook at home.

See their daily updated Instagram profile to see life filtered through California lenses, from sunsets on the beach to surfing perfect waves.

Find them at several opticians throughout the UK or shop the full collection online at their store. Hailing from Japan, Eyevan was established in 1972 by Optec Japan Corporation, in cooperation with the cult brand responsible for taking American Ivy League prep out east: VAN Jacket.

The brand’s first collection featured a total of twenty-seven styles and forty-two variations, all nodding to post-war American collegiate silhouettes that were popular at the time. As the label grew, Eyevan took their wares stateside, exhibiting at a US tradeshow in 1985 and securing a global fan base for their designs.

Today, the Japanese brand is known mostly for its 7285 collection. Debuted in May 2013, 7285 looks to the company’s extensive archives for inspiration, drawing on sketches and designs dating from 1972 to 1985 to create an edit of eyewear styles that manage to strike a balance between vintage-inspired and contemporary.

Both the sunglasses and optical ranges feature silhouettes that point to the company’s past (round tortoiseshell and 1970s-era mustard coloured frames) and present success (sleek monochrome acetate frames), with all models still manufactured in Japan.

Find them at the brand’s luxuriously furnished Tokyo-Roppongi flagship or online at Mr Porterand Colette. Taking it all back to basics is King’s Cross, London-based brand Cubitts. Established in 2012 with the intention of providing high quality handcrafted prescription opticals and sunglasses for a modest price, Cubitts’ eyewear retails at just £100 per pair, and that’s including delivery.

The arrival of Cubitts’ Home Trial service also heralds a new way to shop for eyewear in the UK: browse its online store to choose up to four frames (use the Virtual Try-on tool to help you make up your mind) and trial them at home for free for up to five days.

Each pair of frames goes through a fifty stage production process over a period of six weeks. It’s obvious Cubitts are obsessive about it too, with each of their online store’s product pages crammed full of illustrative diagrams and high quality photography, as well as information on the name behind the style.

Obviously, Cubitts’ main draw is their online home trial system but if you want to get a real feel for these glasses, you can find them at London independent menswear store Albam’s Islington branch. It’s clear to see that the eyewear industry has evolved, with many specialist brands now producing high quality, meticulously crafted eyewear that not only performs, but looks stylish too.

No longer viewed as unfashionable or a hindrance, a great pair of optical frames has the power to become a signature of your look – something that reinforces your personality and cements your style credentials.

But what do you make of the five eyewear brands above, and which is your favourite? Any other brands that you think should have made the list?

As always, let us know in the comments section below…