A young boy, Harry Potter, has a great destiny and attends Hogwarts School of Witchcraft and Wizardry. Cute Harry attracts a large number of fans including children and adults all over the world. His cute round glasses impress us and become a part of his identity. Round glasses are one of the hottest glasses style. A lot of fashionistas are fond of showing a nerdy look while wearing round glasses.

When bitten by a genetically modified spider, a nerdy, shy guy gets spider-like abilities that he eventually uses to fight evil as a superhero. Peter Parker looks like a nerd with a pair of geek plastic glasses. 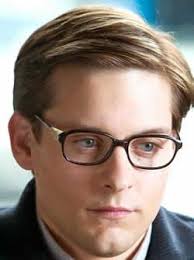 Aviator style is always the main fashion stream. The 1986 action movie “Top Gun” made contribution to the popularity of aviator sunglasses when both Tom Cruise and Val Kilmer appeared wearing aviators. Nowadays, aviator sunglasses are still favorites of most people as a classic style.

Arnold Schwarzenegger finishes off the look with a leather jacket, biker boots and a slick pair of sunglasses. Never has a robot with an Austrian accent been so cool!